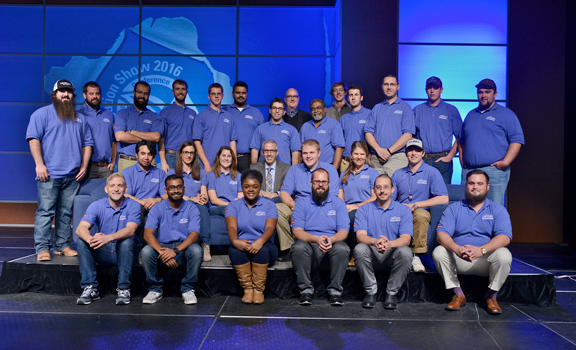 Ewing has been a proud sponsor of the Excellence in Education award for the past two years, and has been deeply involved with the Irrigation Foundation since its inception in 2002 when Sue York, Ewing Chairwoman, served as an original board member.

Last December at the Irrigation Association Show in Las Vegas, Tom Glazener, Ewing Irrigation’s Employee Development and Training Coordinator and 2016 Chairman of the Irrigation Foundation, had the honor of presenting Dr. Ronald Sneed of North Carolina State University with the Excellence in Education award.

“Dr. Sneed’s efforts have been so instrumental to the industry as a whole for years,” he said.

The Irrigation Foundation “advances the irrigation industry using education that both attracts people into the profession and ensures ongoing professional success.”

“We support this award because it aligns with our efforts to promote an educated and trained workforce in the irrigation industry,” said Glazener.

In 2017, Ewing and Toro will co-sponsor the E3 award. The E3 program focuses on helping students get exposure, experience and education within the irrigation industry, and provides them with a scholarship to attend the annual Irrigation Show and Educational Conference.

Warren Gorowitz, Vice President of Sustainability for Ewing and 2017 President-Elect for the Irrigation Association, said Ewing is honored to be able to co-sponsor the E3 award this year.

“We believe students are the future of our industry,” Gorowitz said. “All of the time and effort we (current irrigation professionals) contribute to these students helps shape them to be the next leaders of the landscape and irrigation industry.”