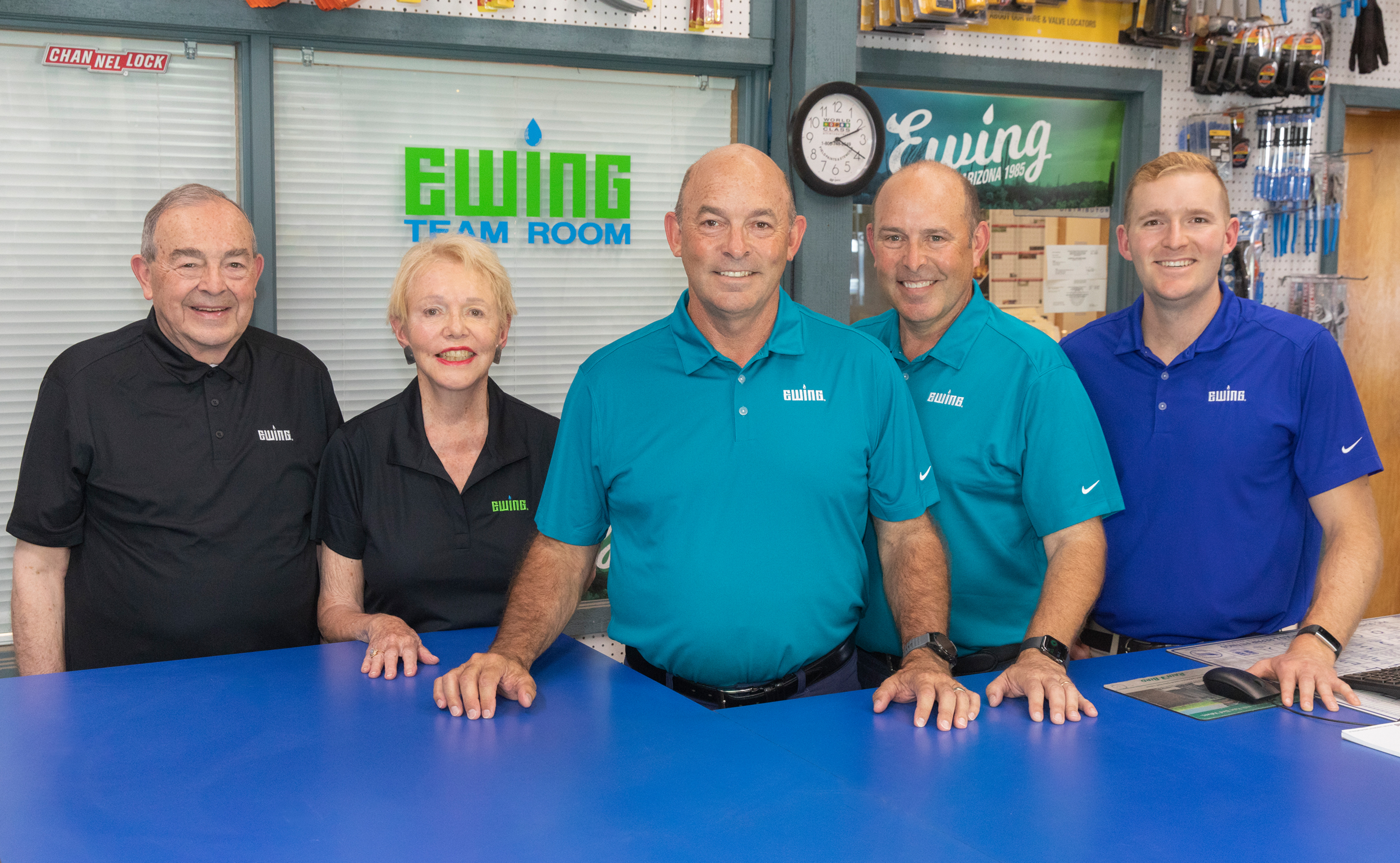 “My grandfather instilled a simple, yet effective, philosophy for our company, ‘treat your customers right.’ That quote has been the foundation on which we’ve built 100 years of serving customers,” said Douglas W. York, Ewing President and CEO. “And it’s how we continue to serve our customers and industry now, inviting green industry professionals to lean on us for their business needs, support and success.”

Ewing’s journey began in 1922, when Atlas Lawn Sprinkler, an irrigation system installer, irrigation designer and distributor, opened in San Francisco. Ewing’s founder, King W. Ewing, joined Atlas as a salesman and installer in 1938. He acquired Atlas’ design and supply division in 1948, renaming it Ewing Turf Products, restructuring the company, and laying the foundation for what would become one of the largest wholesale providers of professional-quality landscape and irrigation materials in the United States. He created the country’s first turf irrigation distributorship by entering into an exclusive distribution arrangement with Buckner Manufacturing, the first of many irrigation product brands Ewing would come to stock.

In 1963, the second generation of family leadership took the helm when King passed the torch to his daughter, Sue, and her husband, Ray York. Two years later, they relocated company headquarters to San Leandro, California, and continued its expansion, changing the name to Ewing Irrigation Products Inc. in 1967 to reflect its full-line product focus. In 1994, they relocated corporate headquarters to Phoenix, Arizona, and opened a second building on the site in 2008 to accommodate the growing workforce. The original two-story corporate office and warehouse building is undergoing a remodel set for completion in 2022.

“It’s been an honor to grow my father’s legacy all these years and to see my sons continue building upon our family business,” Sue York said. “Ewing’s growth, expansion and success can be directly attributed to our innovation, dedication, customer service and most importantly, the family of employees here today and over the last 100 years.”

A third generation joined the family business when Doug York and his brothers, David and Richard, came on board in 1976. While David went on to pursue a successful career in the financial industry, Doug and Richard worked their way up from branch employees to executive leadership positions. Doug has served as President and CEO since 2001, while Richard has led Ewing’s OEM business, Landscape Products, since 2016, as President and COO.

In 2018, Doug’s son, Jack York, became the fourth generation to join the company after several years in the financial industry. He served as a branch manager in Hastings-on-the-Hudson, New York, for two years before returning to Phoenix to work as a product manager. In November 2021, he was promoted to Director of Product Line Management.

“When my dad asked me to join the family business, I jumped at the opportunity to learn from the ground up,” Jack York said. “Three years later, I’m excited to continue working with Ewing employees, product managers, and vendor partners to build on the foundation set by my great-grandfather and strengthened by my grandparents, uncle and father. Ewing’s first 100 years have been great. The second 100 will be even better.”

As Ewing enters its second century, the company looks forward to continued growth, with 230-plus branches in 28 states and counting, a flourishing ecommerce website, and strong relationships with its trusted partners. Behind it all is Ewing’s commitment to honoring King Ewing’s legacy of loyalty and living by his guiding principle to “Treat Your Customers Right.”

Facts and Fallacies About Frost on Turf
By Pat Gross On December 5, 2022
How to Make the Most of Winter Downtime in the Sports Turf Industry
By Chris Ball On November 15, 2022
The Latest on H-2B Visas and the 2023 Season
By Larry Giroux On November 11, 2022