To say that the 2022 Little League Softball World Series (LLSWS) was special is an understatement. It ranks in the top two highlights of the more than 20 years I’ve worked in the sports field industry.The series, held Aug. 9 to 15 in my hometown of Greenville, North Carolina, was the culmination of many moving parts coming together over the past year to create and maintain an incredible, safe playing surface for the girls’ teams. Tournament week and the week before were filled with fellowship, hard work, relationship-building, and a historic moment in series history. 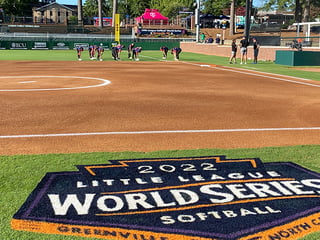 For the first time in the LLSWS’s 48-year history, and possibly in diamond sports history, we had an entire grounds crew comprised of women from the green industry. Each of the 16 crew members, ages 16 to 53, came to Greenville from all over the country to work the last half of the tournament. The presence of the Women in Turf, as they call themselves, was an inspiration to every young softball player who took the field, and to everyone who saw them in action.

The idea for the all-female crew grew out of a conversation with Sun Roesslein of Jeffco Public Schools in Denver, Colorado, who approached me at SFMA’s annual conference in January to inquire about volunteering during the tournament.

We put out a call for volunteers and immediately heard back from women eager to participate. Amy Fouty, CSFM, of the Motz Group in Naples, Florida; Kelly Lynch of PureSeed in Bend, Oregon; and Nina Oldenkamp of Odey’s Field Experts in Omaha, Nebraska, joined us to form the logistics team. Their organization and attention to detail were epic in securing everything we needed, from rental cars, gear, and food to sunscreen, insect spray, liquid IVs, and more.

The support we received from Little League International Director of Urban Initiative/Softball Tournament Director Demiko Ervin and Chief Marketing Officer Liz Brown from day one helped make it all possible, as did everyone who sponsored the Women in Turf.

A 16-member crew is huge for a softball field, especially when no one has worked together before and only one has seen the field and worked the event. Despite those challenges and the heat, humidity, rain, schedule changes, flooded outfield, tarp pulls, mosquitos, and an old field they quickly came together for the common goal and ran the facility like a well-oiled machine after their second game.

Volunteers are the Backbone of the Tournament 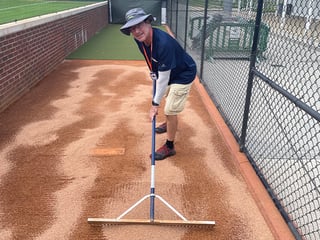 I was proud to represent Ewing, a sponsor of the event, and to serve as the tournament’s field crew volunteer coordinator. What a group of volunteers we had in addition to the Women in Turf crew. I want to give a shout-out to:

There are numerous others who contributed to our effort this year, and we couldn’t have done it without the support of Little League International, the Greenville Little League Softball World Series Committee, and the Sports Field Management Association and its North Carolina and South Carolina chapters, as well as numerous sponsors that donated product, money, and more to the cause. A sincere thank you to all.

We started working as a field crew Aug. 4 to transform the boys’ baseball field at Elm Street Park into a first-class softball field. My brothers and I played Little League baseball at this field, so it holds a special place in my heart, and I’m honored to be involved in this tournament at a place that gave me so much as a youngster.

Built in 1951, this little field has good, strong bones but it’s anything but a modern sports field. For more on its history and how the Little League World Softball Series came to Greenville, read my blog article, Little League Softball World Series to Sport All-Female Field Crew.

We had great weather leading up to Aug. 9, the first day of the series, and the field transition went extremely well. Our fertilization program started back in May, so we had a great stand of healthy Bermuda grass in place.

We dialed in our infield skin, top-dressed with two conditioners, dialed in our pitching and home plate areas, monitored our sod, and used wetting agents to assist with dry spots. We painted foul lines and logos, edged the entire field, moved the tarp back onto the field, reorganized our tools and equipment, adjusted our cut units, and moved in the TV production crew and their equipment so they were ready to broadcast the games on ESPN.

Our biggest challenge was watering the field. Elm Street Park’s pressure- and output flow-challenged irrigation system dates back to the 1950s with a 1-inch water main that comes in from the street for use by both the field and the stadium. Every time someone uses a sink or flushes a toilet, the field loses all pressure and volume.

Our prep crew was up to the challenge, spending countless hours hand-watering the bulk of the field. When you maintain fields, you want every day to be opening day, and the initial group of volunteers who came in from Aug. 4 to 11 set the stage for perfection and crushed it. The field was in as good a shape as I’ve ever seen it. 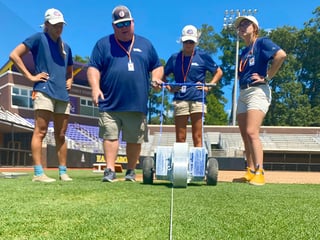 This is a tough time in our industry, with a lot of vacant mowers in the sports field world and a need for interested, qualified, and passionate people, both male and female.

Six young women who volunteered at the tournament—one a high school junior, four pursuing turfgrass degrees, and one who works a second job in Minor League Baseball—are deciding what they want to do and where they want to go in this industry. They received valuable hands-on experience when we were asked to prepare the field at East Carolina University’s softball stadium for a friendly consolation game between Italy and Canada.

The field hadn’t been used in a game situation for several weeks, and it was extremely wet after a storm dropped 1.5 inches of rain on the area the previous night. All six jumped right in to create a nice, safe playing surface for the game, painting foul lines and batters’ boxes, dragging the infield, watering the skin, touching up the edges, and setting up home plate and the pitching area.

Helping teach those six young women some field maintenance tips and tricks put a cap on the entire experience for me and will go down as one of my top highlights.

The other is getting to work with 16 industry pros I’d never have been able to work with had they not volunteered for the Women in Turf crew. We shared a ton of laughs and even some tears, and in the end we all learned from each other and helped advance our industry.

Hat’s off to Sun for her leadership and her friendship—I can’t wait to see what the future holds for the tournament and for our industry as we all work together.

We’ve already had a debrief call and started planning for 2023, sharing ideas for how we can improve on the Little League Softball World Series Women in Turf experience for years to come. As tennis great Billie Jean King said, “if you can see it, you can be it.” Thanks again to everyone who played a part in making the series a career highlight for me and a great experience for the players and everyone associated with the game.

For more information on the 2022 series, to see which team won the championship, and to view game highlights, visit Little League’s event website.

Facts and Fallacies About Frost on Turf
By Pat Gross On December 5, 2022
How to Make the Most of Winter Downtime in the Sports Turf Industry
By Chris Ball On November 15, 2022
The Latest on H-2B Visas and the 2023 Season
By Larry Giroux On November 11, 2022

To Tarp or Not to Tarp Your Field? There’s No One-Size-Fits-All Answer

What Dodge Construction Network’s Midyear Outlook Means for You