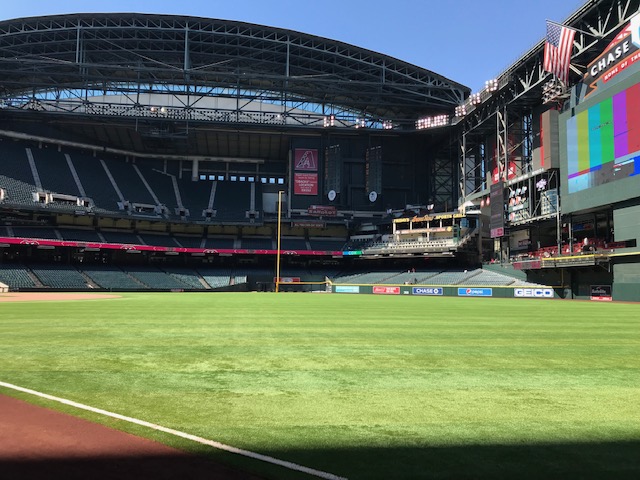 The 2019 MLB season officially kicks off today and while it’ll be the first game of the season for 30 teams, it’ll also be a season full of firsts for the Arizona Diamondbacks. With the introduction of a new synthetic turf field, not only will the Arizona players be adjusting to the new playing surface, but the Chase Field grounds crew will also be adjusting and learning new ways of managing the field.

Synthetic turf isn’t new to the world of professional sports. In fact, for a short amount of time, about 15 years ago, artificial turf was trending. However, that movement ended almost as quickly as it began and many professional fields went back to natural grass. Now, with advanced technology and production quality, the synthetic turf and infill being used at Chase Field is made of natural materials. These new products offer a more natural playing surface than previous artificial turf options.

Installing synthetic turf doesn’t mean the grounds crew won’t have maintenance work to do throughout the season. 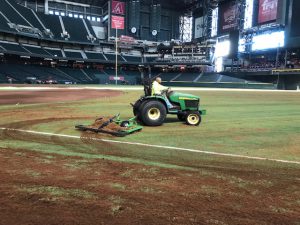 Pierski emphasized the need to continue watering the turf, especially when using organic infill materials, such as coconut and cork. Moisture control is important for long-term use and playability. However, he did note that irrigating synthetic turf will probably take less water than natural grass. In addition to moisture control, there will be wear and tear on the turf, which will require cutting and patching. Pierski also mentioned depressions in certain areas of the turf where players 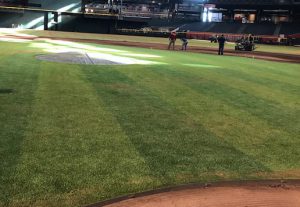 are more apt to stand and run in certain paths. These depressions will need consistent leveling and grooming.

Deciding between a synthetic or natural field

There are a lot of reasons why a sports field should and should not consider making the switch to artificial turf. In addition to thinking about the changes to field maintenance, field managers should consider the installation costs, any potential water savings from changes to the water schedule and year-round aesthetics.

At Chase Field, the team referenced the Phoenix climate as a reason for the change from natural grass. Being in a desert, maintaining a lush field can be difficult, costly and not energy efficient. Without needing sunlight to grow grass, Chase Field can keep the roof closed during the hot summer months, lowering air conditioning usage. The synthetic turf will also help keep the field looking green throughout the season, no matter what the weather brings.

Another advantage for synthetic turf is the ability to leverage the ballpark for more non-baseball activities, such as multi-use sports (like soccer), concerts, events and festivals. All of these activities would cause severe damage to natural grass during the season, but with synthetic turf, the field can handle the additional foot traffic (and the extra revenue).

However, synthetic turf isn’t the answer for every field. If a field has the right environment and climate to grow natural grass, that’s usually what players and fans prefer. It provides a nostalgic feel when heading to a game. Additionally, synthetic turf retains heat more than grass, which can impact the players during a game in an open stadium. Weather will also play a factor for open stadiums that are considering synthetic turf, as heavy rainfall can displace the infill.

The verdict is still out on synthetic turf for players and for the game itself. After the first few weeks of the season, Arizona players and fans will soon see for themselves. 2019 is already shaping to be an exciting season of baseball!